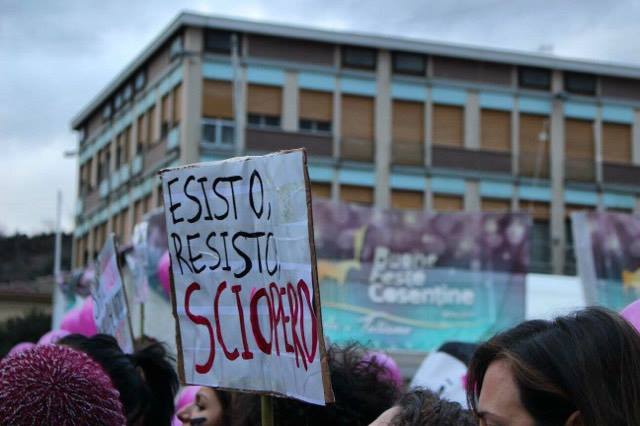 Four years since the first feminist and transfeminist strike, the global uprising of women and dissident subjectivities has not halted and, more and more, marks and swamps all existing struggles.

This is why we launch a challenge, multiplying the times and places of our revolt: March 8 will be the day of the global mobilization in the territories and March 9 the day of the strike. We will reclaim each and every space that is taken away from us every day: in our cities in the name of alleged safety, on our workplaces, in our schools, universities, and at home. We will turn our time into turmoil, to fill it up with our desires and to build common strategies together, in spite of those who would like to isolate us in our solitudes. The feminist and transfeminist strike is a political act of refusing violence.

We rebel against the rapes and femicides happening every day and that are now treated as something ordinary and always, irremediably, as a responsibility of women.

We rebel against the brutality that lashes out against LGBT * QIA + people, which translates into verbal and physical attacks that go as far as murder, into greater difficulties in accessing work, and into psychiatric pathologizing and devaluating of self-determination.

We rebel against the violence of institutional patriarchy that in court punishes women and minors who break the blackmail of domestic violence by revoking custody; that criminalizes women who report harassment, abuse or violence; the same we find in hospitals and systematically prevents us from deciding freely on our bodies and our lives; that is replicated in schools and universities when knowledge serves to legitimize gender roles and hierarchies.

We rebel against the violence of those who treat our bodies, the bodies of all living species and the earth as breeding ground for profit and exploitation.

We rebel against the harassments that torment us at work, aimed at making us accept in silence our daily exploitation and wages that are habitually lower than men’s.

We rebel against the racism that imposes itself on our bodies with the ferocity of rape along the borders and in detention centers, with the exploitation of those who are blackmailed and without rights, which follows us even if we were born and raised in Europe, which continually hinders with boundaries our freedom to move.

The feminist and transfeminist strike is a global uprising. Kurdish women on the war front in the Middle East are fighting against the patriarchal, neoliberal and authoritarian fundamentalism that ties Erdogan, Trump, Russia and Europe.

Latin America and Africa have been arising for months defying the environmental destruction that is crushing the lives of millions of people in the name of a capitalist colonization that passes through the exploitation and destruction of ecosystems, the extraction of natural resources and living labor, the IMF commands and the ferocious repression of national governments. In India, it is the women who are fighting to challenge institutional racism. Next to them, in Italy and in Europe, we practice the strike as a process that gives us the strength to break the isolation and the existing power relations.

The feminist and transfeminist strike is when we speak with one voice. In ideal transnational communication with every feminist revolt in the world, on 8 and 9 March we take to the streets together and express our strength so that everyone can feel they have the power to escape the blackmail of domestic, institutional, economic, media and judicial violence and so that we can all experience a possibility of liberation from which we do not want to go back.

On the 8th we will give exposure and voice to those work and life conditions that are at risk of being invisible because “it is normal” that a mother spends the Sunday cleaning while cooking for the whole family, or that the supermarkets are open thanks to whom for a starvation pay must work on Sundays, and maybe feels guilty for having “abandoned their family duties”.

We do not believe this is “normal” and we will display all over the cities what is invisible, along with our refusal to humbly accept this double exploitation, we will show there is a relation between domestic violence and violence on the workplace, between the exploitation that our fathers, partners and employers force on us, between those ruling and the misery of our salaries.

For this reason, on 9 March we will once again proclaim the feminist general strike, crossing our arms and interrupting work at home, in factories, hospitals, warehouses and schools, offices and canteens, without distinction of category.

We reclaim liberation and emancipation, an income to self-determine ourselves, a European minimum wage and universal welfare. We want safe and free abortion, access to care and health. We want autonomy and freedom of choice over our lives, our genders and our sexual orientations. We want to redistribute the burden of care work.

We want to be free to go wherever we want without being afraid, to move and to stay against racist and institutional violence. We want the security laws to be revoked and the identification and expulsion centers to be shut down. We want a European residence permit without provisions, we want to break the tie between residence, work and family relationships, we want the citizenship for those born and raised in Italy. We want to end the patriarchal violence that endures this uneven society and this capitalist and extractivist economic model that destroys the planet.

We are in continuous turmoil: we believe feminism is a posture and a daily struggle. Towards 8 and 9 March we build revolt, thought and uproar starting from the territories we live: assemblies in the cities, student meetings and mobilizations, meetings on workplaces, intervention in mass neighbourhoods, intersectional alliances without borders.

We are aware that not all will be able to strike in a conventional way, because the right to strike has been taken away from many of us! Job insecurity, undeclared work, unemployment: no one deserves to be alone! This is why we invite everyone to take part in the strike and make their participation visible in the forms that we will publicize in the coming days.

On 8 and 9 March we will build feminist times to mark the hours of our day, out of the rhetoric of the biological clock, we will take back every space that we were denied! Like we already said and will continue saying: if our lives are valueless, we strike!